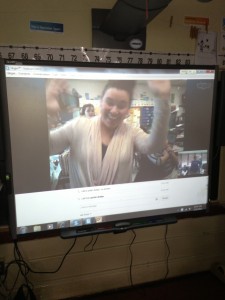 @JerseyAlicia assisting with the inter-district Skype!

On the way in to work, I was perseverating over our growing discipline numbers in the month of February. I was out the school the day before at a workshop, and I hoped that I wasn’t walking into “one of those days.” Well, in a sense, I was right! It would turn out to be one of those days that makes blogging easy. 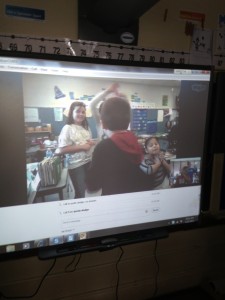 The school day started smoothly. I had a few teachers that invited me to learning events. I made sure to update my calender, and I was off to a meeting to … spend money on our most precious commodity… our students! based on the budget, I will be able to start a 5 week Saturday program, extend our before/after school programs, and purchase more devices to enhance student learning! What a great meeting!

I was running late (this is a constant) to my observation in Kindergarten armed with my iphone (this was my first attempt to capture an observation on my iphone). As I tried to observe the staff member, I had students come up to me to talk. They wanted to tell me about the book they were reading, what they ate for dinner last night, and how they were improving with swimming. I joked with the teacher that they seemed very engaged today. She laughed, and said, “Welcome to my world!” After the observation, I attempted to leave, but the rest of the class wanted to tell me how the Superintendent came to visit them at swimming. Hmm, I thought, I haven’t even made it to swimming  yet this season. 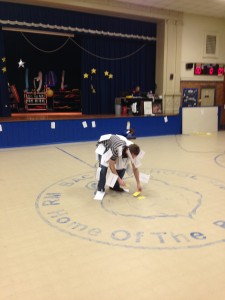 Mr. Hudson was covered with numbers before the activity even began.

I scurried up to 5th grade (running late again). One of the 5th grade teachers was working collaboratively with another group of 5th grade students from across town through Skype. I watched as the kids introduced themselves to each other and began to work. I tried to do a walkthrough on the other class. I asked a young man what he was learning and why it was important. He was able to tell me that they were working collaboratively on reading a passage, and that it was important to identify vocabulary for understanding. What a great experience! 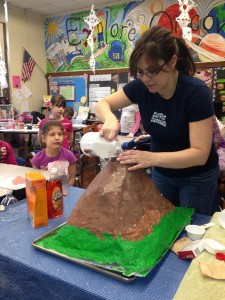 I then ran upstairs to the 3rd floor to observe a Volcano Experiment. The students were on the edge of their seats the entire time. She set the stage, engaged the students, had them write down their predictions, and eventually …. poof… a learning memory. These kids, for the most part, will never forget that experience. They all had smiles and were so excited. Impossible is really Nothing!

After I finished with the Volcano Experiment I ran down to the gym for math class… Yes, the same 5th grade class that was skyping earlier in language arts were set to test out another activity that they developed for math. I had to recruit a team (I picked the math supervisor  the curriculum coach and our SuccessMaker facilitator) to compete against the students. In the first activity, well, let’s just say we lost. All we had to do was solve the problems by finding the correct numbers that were placed throughout the gym. During the activity, we were penalized for running, and solving the problems out of order. We came in 4th place. The kids were howling! The next activity required us to read a list of problems, solve the problems, find the answers scattered throughout the gym all while connected at the arms. This really required us to work collaboratively. We redeemed ourselves and won! I love winning against 5th graders in math 🙂 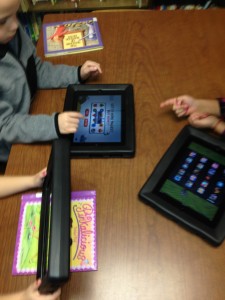 I made sure to congratulate the students on a job well done, and was off to prepare for our monthly PBIS meeting. I knew we had big problems to identify and solve! As I reviewed the data, I was somewhat encouraged. Compared to last year, we have nearly 40% fewer Office Discipline Referrals. As I ate my lunch, I thought to myself, there are some positives here, the data tells an important story. 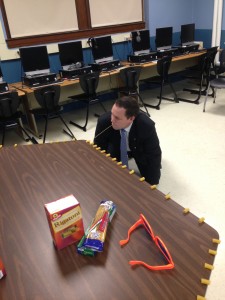 @drgentilemps takes the Minute to Win It Challenge

As I arrived to the PBIS meeting I remembered that our Superintendent would be joining us. Pressure. We reviewed the data during our meeting. We talked about root causes, trends, possible solutions and ideas for improvement. We dug into some of the data and established that 24 students (out of a school that has 320), were responsible for over 85% of the Office Discipline Referrals. We brainstormed ideas to help these students. The superintendent told me afterwards, “Basically, Spike, you have to adopt those students, assign them mentors, and keep them engaged in the process. You guys will be fine!” 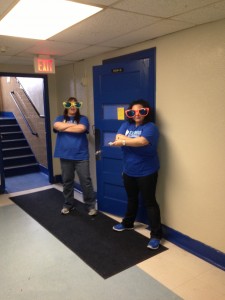 Bear Buck Challenge. Spend a Buck to enter the room!

Our committee went down to unveil the monthly “Bear Buck Store” where the kids can cash in their bucks for rewards. This month we tried something new. We wanted to create a buzz for the positives! For a single Bear Buck, a student could enter a door to compete in a challenge. In addition to the challenge, they could spend their bucks on homework passes, time on ipods, or even time with a teacher. The students who chose the challenge walked into a room with tables lined with rigatoni. They were given a piece of dried spaghetti, a few instructions, then had a “minute to win it.” If they were successful  they kept their Bear Buck. At the end of each session we explained the importance of earning Bear Bucks and how next month we would have similar activities for their reward! (Its simple, students earn rewards for Being Safe, Being Responsible, and Being Respectful!)

The end of the day went off with out a hitch. There were no discipline referrals for the day! The buzz of learning, innovation, and 21st century skills prevailed!

Basically it was the kind of day that makes blogging easy!

Change is neither good or bad, it simply is….

As a principal it is inevitable that you will be required to implement change. There are a range of possibilities of change from the mundane to the kind of change that keeps you up for 3 nights plotting, planning and organizing.

I have been steeped in the concept of change for years. I’ve read all of the leading authors from the field such as Whittaker, Fullan, Senge, Argyris, Kouses, Posner, and even Gladwell. All of these teachers, along with real life experiences, have shaped my philosophy on change. I’ve found that sometimes, we have to change because it’s imposed, sometimes out of necessity, and other times, well, it is just time.

Since the summer I have been charged with improving my school’s performance on the state assessments (This post is NOT going there). I have had to cull through data, brainstorm, and strategically plan for continuous improvement. Fortunately for me, the entire school has rolled up their sleeves and joined in this crusade. I work with some of the most dedicated teachers in the world!

We are now 8 months into our new “focus.” During that time we have changed many things about our school. In fact, two weeks ago a teacher came in to share an insight she had regarding our school. She said that she had been talking to some people, and admitted that she tries harder now, is more focused, and actually thanked me for creating a culture that helped her grow as a professional. It literally took me about a week to realize the impact of her personal reflection. Wow!

So what has been my process? What have I done? Why? So I figured I would list the process in order to reflect. These are not necessarily in sequential order.

As with any new change, there will be those who will get on board, others will criticize and still others will wait and see. Only time will tell if these new tools, philosophies, maybe some would say a more “focused” approach will pay dividends…. In the meantime, as the leader of change, I remain excited, even anticipating what is to come….. OK, I can’t wait to open the present this summer and peek inside to actually prove that we have changed, improved!
I always tell my staff I need them. In fact  I say I NEED ALL of them. We can’t fix this without everyone on the same page (even those who challenge the process – We need everyone).
That is why…

change is neither good nor bad, it simply is 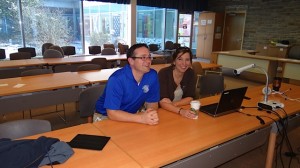 Skypeing into the 2013 Techspo with Carrie Sinone!

A few weeks ago I wrote two posts that garnered a lot of attention. I appreciate how supportive everyone was when I posted about losing my Leadership Mojo. My friend and mentor, Brian Robinson, commented on the post. What he said resonated with me, and I wanted to share it with everyone,

Spike-
There are seasons in every part of life. This includes leadership. As the ancient teacher said, “To everything there is a season…a time to weep and a time to laugh…a time to mourn and a time to dance…a time to keep silent and a time to speak.
This seems to be your season to reflect and re-energize. Your mojo isn’t gone, it’s just taking a break. Hang tight and keep doing the right things you always do!

Brian knows me all too well! My leadership mojo wasn’t gone, it was taking a break. In addition to Brian, I also heard from some other mentors in my PLN who shared their leadership struggles. It was really helpful to hear that I was not (am not) alone! So, that’s it. My Leadership Mojo is back, because it was never gone! 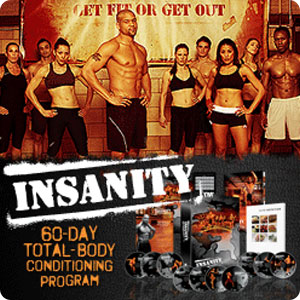 This work out is “Bananas”

Now for the New Year’s Resolution. I gave up. In the post, I talked about wanting to try the middle path, and not do anything extreme. Well, I signed up for the Biggest Loser at my school (we have about 7 teams with 3 to 4 people per team competing). And guess what? I want to WIN! So I started doing Insanity this week. I actually have been getting up a 5 AM (after being inspired by my teams’ dedication) and doing Insanity. As of now, we are in 4th place and moving up ever so slightly each week. Since participating in the competition, I have come to look forward to Friday mornings (it helps that I have lost 6 pounds). My school is always a fun place to be, but Friday mornings now have an added jolt of camaraderie,  joking, and most importantly… weight loss! Our entire Biggest Loser competitors have lost 132 pounds in 3 weeks!

Lastly, I want to thank everyone for their support for my Insights Into Learning blog. I just celebrated my first full year of blogging. I was humbled to see that I had 54,030 visitors through my cluster map last year. Here’s to another successful, reflective year!