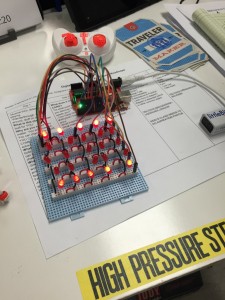 What can you make?

Recently, I had the opportunity to visit Northfield Middle School. That’s the beauty of having a PLN. I reached out to Kevin Jarrett and Glenn Robbins because I had to see their new “maker room” and the EdCamp style afternoons for the kids. It was everything I thought it would be…. and more!

As I walked around the school, I was impressed with how the hallways had transformed into “Idea Streets.” Kids, middle school kids, were treated like college kids. If they wanted breakfast, they just had to go to the kiosk near the front office. If they wanted to sit down and collaborate, there were chairs for them to do so. If they wanted to write on the walls, or the windows, they could. There were no “bulletin boards” because they had been replaced by white boards. 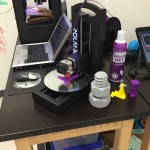 Kevin’s room is crucial to development of student exploration. It was obvious to me that Kevin is a perfectionist and it showed in the room. I followed the progress of the room over the summer, but I never imagined it would be so… inspiring. Everything had a purpose. Everything from the design of the room, the walls, chairs, tables, the lighting, material storage, and especially the course itself. As I watched kids come and go for their “class” I was impacted by the discussion, the cadence, the creativity, and even the coolness. 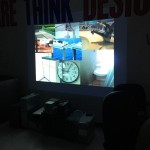 As we were touring around, Glenn introduced me to a few kids. I was able to see what they were working on, and more importantly, why. One of the students was working on a design that he was hoping to get picked for the 3D printer. He shared with me how the site he was using helped him apply what he was learning from math, science and language arts. As I scanned the room, all of the kids were on their Chromebooks doing the same thing… pushing their learning, listening to music, creating, and designing. 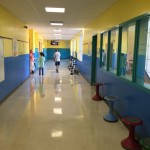 Glenn asked a girl to come out in the hall to discuss the afternoon EdCamp. She was the one who was working on the art in the for the Respect Campaign. As we talked, she said something that really struck a chord, “I  love how this school allows us to have a voice. We can choose what we want to learn in the afternoon, and the teachers listen to us. I’ve never felt like this in school.” Honestly, neither had I growing up! 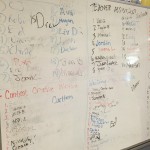 The EdCamp afternoon board

Very often we hear about cool things and immediately want to get them into our districts/schools/classrooms. What I saw in Northfield was the result of hard working, innovative thinking people who were ready to work collaboratively over the past few years to get to make a difference. This didn’t happen overnight, and it didn’t happen by chance. Everything happened (and will continue to happen) because the stakeholders (parents, teachers, BOE, students, administration and community) worked collaboratively to create a culture that encourages doing what is best for kids!

People are talking about this school… Check out these blog posts about Northfield  Middle School:

When I first arrived at the elementary school I was very impressed by the 8 kids who were in the band. It was clearly a dedication that went above and beyond what was offered at the school. Fast forward 4 and 1/2 years and I am amazed at the 48 students in the band (the enrollment of the school has been steady in the 320 range). 48 students is a lot when you are talking about practice, instrumental instruction, and playing as a unit.

Our Band teacher has worked tirelessly to establish one of the most advanced elementary programs in the school district. One of the tools that she uses when instructing the kids in small groups is Smart Music.

By using Smart Music, the students can track their progress with their instrument. It records, plays, and guides the students in their quest to master their instrument. When this was presented at our most recent “tech Friday” it trumped anything the that was presented that day. It has everything that classroom teachers seek: data, continuous improvement, and timely feedback for students. What more could you ask for?

I was in a meeting the other day and someone made a very important insight…. our problems are coming from the new ones (in schools that means our transfer ins). Ah, yes, I replied, “It is because we have not developed relationships with those kids.”

What are you doing to develop relationships with those who are new to your school? District? Or organization?

We wonder about how things present themselves to us. We are often challenged by the obstacles we face on a day to day basis… but is it really so strange?

Isn’t the presentation of problems an indication of lessons yet to be learned?

This summer, I was in an Equity and Diversity workshop with Paul Gorski and he presented two options for us to consider.

1. We could save the Starfishes…. Meaning, once we saw a problem, we could work to solve it immediately.

The Starfish story is a very popular story. Basically, A young man is walking along the ocean and sees a beach on which thousands and thousands of starfish have washed ashore. Further along he sees an old man, walking slowly and stooping often, picking up one starfish after another and tossing each one gently into the ocean. “Why are you throwing starfish into the ocean?,” he asks. “Because the sun is up and the tide is going out and if I don’t throw them further in they will die.” “But, old man, don’t you realize there are miles and miles of beach and starfish all along it! You can’t possibly save them all, you can’t even save one-tenth of them. In fact, even if you work all day, your efforts won’t make any difference at all.” The old man listened calmly and then bent down to pick up another starfish and threw it into the sea. “It made a difference to that one.” (source: http://www.esc16.net/users/0020/FACES/Starfish%20Story.pdf)

One summer in the village, the people in the town gathered for a picnic. As they leisurely shared food and conversation, someone noticed a baby in the river, struggling and crying. The baby was going to drown! Someone rushed to save the baby. Then, they noticed another screaming baby in the river, and they pulled that baby out. Soon, more babies were seen drowning in the river, and the townspeople were pulling them out as fast as they could. It took great effort, and they began to organize their activities in order to save the babies as they came down the river. As everyone else was busy in the rescue efforts to save the babies, two of the townspeople started to run away along the shore of the river. “Where are you going?” shouted one of the rescuers. “We need you here to help us save these babies!” “We are going upstream to stop whoever is throwing them in!”  (source: http://fasarizona.com/riverbabies.htm)

What are you going to do? Are you willing to swim up the river or just wait on the shore? Choice is yours….

Earlier this week we started Genius Hour 2.0 with the staff. Want more information on how we got here? Check out Genius Hour 1.0. I started off the meeting with a quote I heard on a podcast on the way in to work….

I’d rather have questions without answers than answers without questions – Max Tegmart, MIT Cosmologist 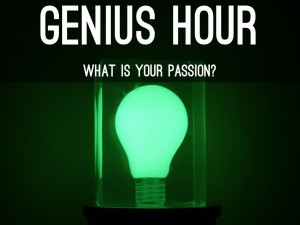 Our Genius Hour 2.0 is a drop in the bucket that is as big as an ocean. Reflect on this – How often do we provide staff with time to ask big questions, or even focus beyond the “here and now” to the future? The answer is not much. Not much at all.

Teachers are generally putting out the proverbial fires on any given day. Ask them to think about next year, 5 years from now and you might get a look. In their defense, that look is well deserved. They simply are not provided adequate time to work on the big picture because they are mandated to attend trainings, lesson plan, teach, grade, discipline, talk, listen, conference, work collaboratively on the most recent data, etc… and repeat. Every day for the school year.

To me, Genius Hour is my way of giving them back 20% of the “staff meeting” time to clear their head. Maybe, just maybe, this time requires them to think beyond today, next week or next month. I need them to think about anything that can improve the school.

So as the staff embarks on Genius Hour 2.0 I am hoping that they are able to travel up to the balcony and think about their passion, our school, and where it is going. This will be time well spent, and an opportunity for teachers do something different. To solve a problem that may not exist. To ask questions that can’t be answered.