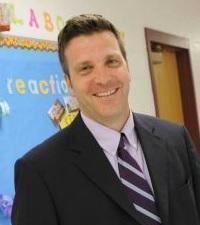 The Principalcast Crew welcomes Peter DeWitt to the show on Sunday, July 6 at our new (summer) time of 8:15 PM EST. Peter will be discussing his tenure as a Principal, his new position as a Visible Learning Trainer, and the upcoming Connected Educator Series which is anticipated to be released in the fall of 2014.

Peter is an author, speaker, and presenter. His blog, Finding Common Ground, is published by Education Week. He is a freelance writer for Vanguard Magazine. Peter published his first education book, Dignity for All: Safeguarding LGBT Students in 2012. He contributed a chapter in Peter Lang’s Authentic Alternatives to Accountability and Standardization. He has two forthcoming books to be released this fall: School Climate Change (co-authored with Sean Slade) through ASCD Arias, and Flipping Communication Doesn’t Have to Mean Reinventing the Wheel, through Corwin Press.

Peter spent 11 years as a K-5 teacher and 8 years as an elementary Principal. As a principal, Peter was named the 2013 Outstanding Educator of the Year by School Administrators Association of New York State (SAANYS). He recently resigned from his Principal position to focus his efforts on writing and his new position as a Visible Learning Trainer.

Peter has presented at local, state, national and international conferences. Most notably, Peter presented at the NAESP, ASCD, ICLE’s Model Schools, and was a panelist on NBC’s Education Nation.