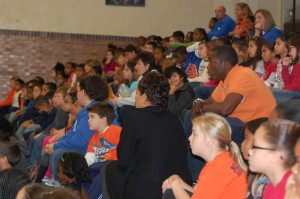 I went home early on Monday because I was feeling tired and had a headache. I was hoping that I wasn’t getting the flu. I stayed home on Tuesday and Wednesday because the symptoms were not changing. Mrs. Harris filled in for me while I was out and she said that she had no discipline write ups!That made me feel better knowing that our Bacon Bears were behaving while I was out. Thursday we had our staff meeting on Classroom Instruction That Works (Non Linguistic Representation and Cooperative Groups). On Friday that staff wore their new Bacon gear, or blue and orange to support the Thunderbolts’ State Group 4 Championship Game. We hosted Steered Straight and the Cumberland County prosecutors Office for an Anti-Bullying Assembly. The assembly was energetic, informative, and contained an important message: Don’t be a bystander, be an UPSTANDER!