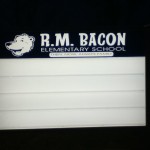 Our new electronic sign was installed this week. I have had a lot of positive responses from parents, community members and teachers since it went up. One day, as I was standing out near it during dismissal, I had a student comment about the new Bear logo. He said it wasn’t “tough enough” and how could he wear the logo on a shirt and compete at Olympic Day. I thought about it after he left and then later on that evening it hit me. The next day I went back to the student and I told him this, “We have a new bear which was designed for our new image. And as for this bear not being viewed as ‘tough enough’ you have to remember that the real Bacon Bear is in your heart, not on a shirt or a sign.”