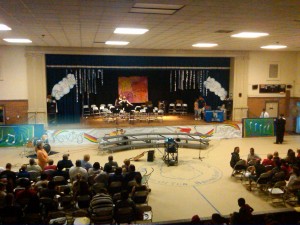 Just minutes before the Spring 2012 Concert

As an Elementary principal I have had the opportunity to play floor hockey, football, kickball, challenge students in math, substitute teach, write essays, and even tried Double Dutch  with the students, and teachers. Up until the other night, one thing I had never done was perform with a School Band.

Growing up I had an appreciation for music, but never had any interest, or patience in playing instruments on my own. A lot of my friends played the guitar, drums, and even the Tuba, but not me. So in order to grow as a professional, I came out of my comfort zone and played the cymbals in our Spring Concert!

I have to admit that during the practices, I felt just like a kid, and I was treated like one! My fellow band members had little patience for me at first. They would say, “Dr. Cook, you are supposed to play on 23 and 29. See its right here!” I had to inform them that I didn’t read music. They laughed at me! Before long I wore them down, and they all chipped in to make sure I met my marks.

As for the actual playing of the cymbals, I needed a lot of practice. All I was required to do was a cymbal roll. I was told to start in the middle and “roll” towards the outside of the cymbal. It was not easy. I played too quiet, I played too loud, and I messed up a lot. One of the kids in the percussion section told me, upon seeing my frustration, that I needed to play with more confidence.

I got a lot better through one word…practice! I attended as many practices as I could leading up to the performance. I thought about my part, I talked about it to other musicians. I felt like I was a part of something.

My main goal for participating in the concert was to show kids that they could achieve something if they set their minds to it, and used their resources. I tried to show them how difficult it was for me, and that I too have challenges in my life. 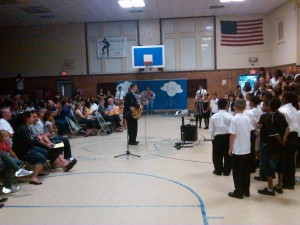 I also learned a little more about the correlation between playing in a band and leadership. Although the conductor is in charge, everyone has their parts, and with that everyone needs to be on the same page. Each instrument has its purpose, and there are times for solos, playing along with everybody and letting others take the lead. Every0ne has to work together for the music to sound beautiful. You have to trust that everyone else has practiced, and that they are following the script. Mistakes are bound to happen, and sometimes those mistakes are only heard within the band.

Thankfully, it all came together on the night of the concert. I welcomed the parents to the Spring Concert and admitted that I was nervous (but I didn’t tell them why). Once the concert started, I got into the zone. I remained focused on my objective…cymbal roll. I felt such a rush after we finished our first song. Although I probably missed a few of the notes, I was on cloud 9! 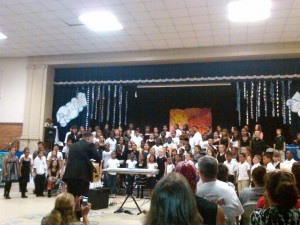 Thanks to everyone who supported me in my first concert, self-titled, “Cymbolic Symbolism.”

One thought on “Cymbolic Symbolism”