Part 3 of the ongoing series where students are solving the achievement gap issues at RM Bacon…. 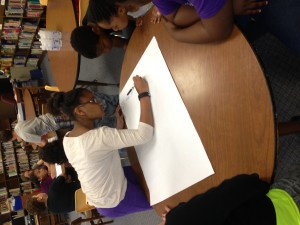 During our 3rd week we had the students spend the entire day steeped in cooperative learning. In preparing  for this, we thought a lot about how we teach kids to work cooperatively as opposed to just having them work on an assignment in close proximity. Cooperative learning is difficult… especially when you combine students in grades 3, 4 and 5 who may have never worked together prior to this program. Honestly, how often can adults say they really work collaboratively? (that’s another blog for another time).

We spent the first part of the morning teaching the students how to work cooperatively. We made sure that they understood that everyone in the group needed a responsibility  We taught them how to honor brainstorming ideas. We taught them group consensus tools (thumbs up, down or in the middle). Everything had to be voted on and the students had to learn the art of consensus. For instance, in one group the discussion boiled down to one question… How could they get Timothy from thumbs down (he opposed it) to thumbs in the middle (he could live with it).  Ironically, it was Timothy’s own idea that he eventually couldn’t live with and the group had to re-work their plan. Frustration! Tears! 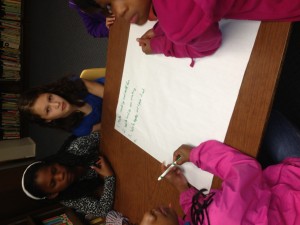 Cooperative learning is not always fun

All three groups had tears. It was difficult for students to truly honor ideas, plans and even concerns regarding their projects. Even though we modeled cooperative learning and facilitated the groups, we still had struggles. The students became very frustrated with each other, some felt left out…. all of the kids wanted to give up at some point. We stayed with them and helped them through the struggles. After seeing the frustrations evident in each group we all looked at each other and said ‘they need a break.’

During the break, we took the kids outside for some fun team building exercises. Although it was a simple activity, the kids loved it. They had to get a ball around the circle (without giving it to the person next to them and they could only touch it once). We modeled manners (which actually helps the students understand the pattern of the game). Anytime they passed the ball they had to say the person’s name. Anytime they caught the ball they had to say “Thank you” and then the person’s name. As the students figured out the pattern, they were able to add in multiple balls and one team were able to have 7 going at the same time. Success!