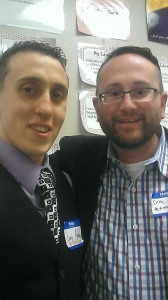 The next generation is here. Picture you are in college and you happen to have a professor like Kyle Calderwood. Kyle, for those of you who don’t know, is a professor at Stockton College, and has been a connected educator since 2009. He has had an enormous impact on southern New Jersey as the founder of TeachMeetNJ, and is a mentor to many aspiring educators.

In class, Kyle reviews the power of being a connected educator, and among others, Louis Apalucci is in his class. Louis said his eyes were opened by Kyle, and that he never knew Twitter could be a professional learning tool. Louis graduates in May 2014 and begins his teaching career in September 2014 as a middle school math teacher. As a new teacher, armed with a previously established PLN, Louis dives right in. He has been talking about the power of being connected at his school. He attended EdcampNJ to connect face-to-face with like-minded educators so that he could learn more. I was lucky enough to chat with him over lunch with Glenn Robbins. He has so much potential, such a willingness to learn. This is only the beginning.

Now fast forward 10 to 15 years down the road when newly hired teachers will reference teachers in elementary school that encouraged them to blog, tweet, and post responsibly to Instagram. They will have a PLN. They will have connection. It will be second nature. They might even teach a seasoned Louis Apalucci a few things 🙂