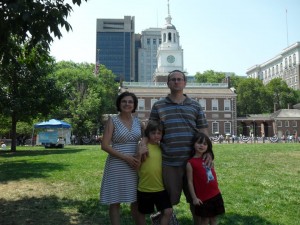 Over the weekend, many South Jersey communities lost power because of a quick, but violent storm that crashed through the area. We lost our power on Saturday, June 30 around 3:00 PM. Since we were hosting our nieces, we decided to get a hotel for a night. We quickly learned that all of the hotels in our area were booked, and ventured to Philadelphia for a room.

We stayed in the Holiday Inn (right next to the Philadelphia sports stadiums) in South Philly. I was able to go out for a run on Sunday morning, and the views were breathtaking (especially for a Philly fan). I ran past Citizens Bank Park, Lincoln Financial Field, and the Wells Fargo Center! 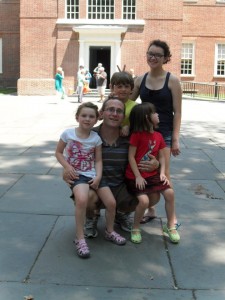 Later that day we took the kids into the historic section. We walked around Independence Mall, the Carpenter House, the Second Bank of America, and Ben Franklin’s House. The kids held up considering it was scorching hot! 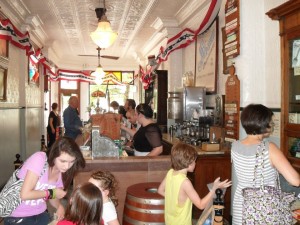 Throughout the trip, my 14 year old twin nieces continued to suggest that we visit Franklin Fountain. They said that they had seen it on the Travel Channel’s Man vs. Food, and had to try the Vesuvius sundae. Honestly, I thought it was a real fountain, but they explained that it was an ice cream place. Around lunch time we arrived at the famous Franklin Fountain. I was amazed at what we saw. 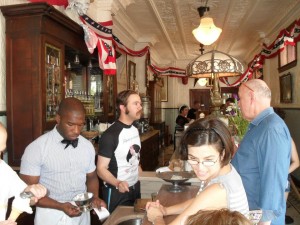 Walking into the ice cream store was like walking into living history. There was nothing modern in the store. Everything was decorated as if it was the early 1900’s. After everyone ordered, we went outside to enjoy the treats. I struck up a conversation with a gentleman from England. He explained to me that he had been in Philadelphia studying, of all things, ice cream. He had visited many of the famous places, but raved that the Franklin Fountain was the best. 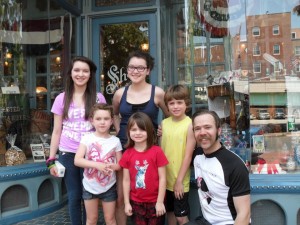 Eric spending time with the cousins

Right before we were about to leave, one or the owner’s, Eric, came outside. We talked with him, and I explained that my nieces were determined that we had to visit his store. I asked him about the British gentleman who was at the store earlier. He told us that the man we were talking to was the world-renown ice cream historian, and research, Robin Weir.  We took some pictures with Eric, and we went on our way.

There are many lessons that I took away from this experience.