I challenged myself this summer. I decided that I was going to seek out instructional leaders making a difference in education. I wanted the selections to be people I have never met in person. So I scratched off Steven Anderson, Tom Whitby, Lyn Hilt, Joe Mazza, Ned Kirsch, Katrina Stevens, and Eric Sheninger (All folks I met in person at ASCD 12). They are making a difference in education. I wanted a real challenge for myself since I am somewhat new to all of this. I wanted to connect online, Skype, write, reflect, learn, and post. Here is the first in the series.

I went through my twitter account, and the first person I looked up was George Couros. By now, we all know George. In fact, he was the first “education” person I followed on twitter back in January. George is the driving force behind Connected Principals, #cpchat, Blog 184, #learn365, and a host of other initiatives. Currently, George is the Division Principal of Innovative Teaching and Learning with Parkland School Division, located in Stony Plain, Alberta, Canada. With a super-supportive administrative team, this position was recently created to allow George to do what he does best: innovate, and motivate students, teachers, parents, and other administrators!
Our discussion covered a plethora of topics, and lasted close to an hour. George was fresh off of an exciting trip to ISTE12 in San Diego, and after he completed his day, he and his brother Alec were preparing for a trip to Australia for a few weeks to speak, consult, train, and spend time with educators “down under.” 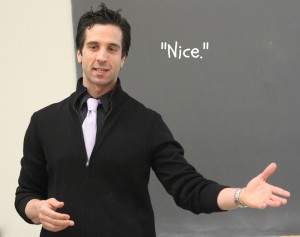 George gave me a brief history lesson on his social media journey. Similar to most, George was very hesitant to join in on social media. It was through constant prompting from his brother, Alec that George decided to give it a try. He dove in with everything he had. Back then, he said, there were a lot of teachers online. He continued to hear a constant theme; I wish my administrators understood the power of social media and connectivity. The rest, they say, is history.
We spent a great deal of time discussing blogging. George is very passionate about blogging, and he has a unique approach. He views it as an online portfolio, a space where he can write what he wants and about what intrigues him. He eschews editors and rarely cues blogs for future posting. Rather, he gets inspired, writes, posts, and walks away. His inspiration comes while he is running, spinning, or just whenever. He wants his blog to be personal. He doesn’t over think it. He wants the readers to see the struggles, the mistakes, and the occasional error. 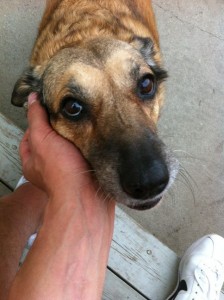 On June 9, in Fall Apart; Fall Together, George set Twitterverse into overdrive. He shared a very personal struggle that he had been dealing with during the past few months. He was not himself, a bit off, maybe disillusioned or burnt-out. What helped him the most was helping others. He spent some time with animals in the Edmonton Humane Society. After this experience, he used his influence through Twitter to encourage people to help out animals who needed a home. He learned a lot about people through this experience. He also put it out there for everyone to see (and read). He told me that he received such an outpouring of responses to that blog post. Yet, people were not necessarily responding on his blog or on Twitter. It was through email, and direct messages that he began to see something emerging. He discovered there were many people out there with the same state of mind, and searching for something or someone to help them. These people were school administrators, teachers, parents, businesspeople, etc. These people were hurting. George’s blog posted helped them. 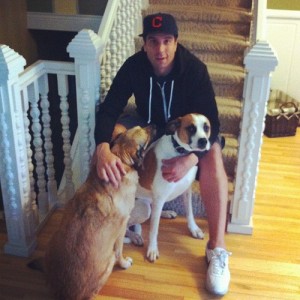 George and his dogs. Source: @gcouros

So as we go through the summer, know that George will be in Australia (and I am sure blogging and posting), and we can continue to follow his journey. What I think we can all learn from George is for us to be real, and even vulnerable in our blogs, leadership positions, classrooms, and even at home. You never know who you may help out.

The Principal of Change, George Couros

6 thoughts on “It’s not about TIME, it’s about PRIORITY: My Skype with George Couros”