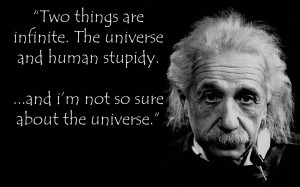 Do you know a “know-it-all?” You know, the person who always has an opinion, never listens, seen it all, knows so much information… I am quite sure that a “know-it-all” is lurking in your midst… I’m actually surprised that we still have “know-it-alls” because of the ever changing nature of information.

I decided to do some research for this post (because I don’t know everything). First, I wanted to see what the “great” minds had to say about this concept of knowledge.

Here is what I found:

The more you know, the less you understand. Lao-Tse

To appear to be on the inside and know more than others about what is going on is a great temptation for most people. It is a rare person who is willing to seem to know less than he does. Eleanor Roosevelt

If you can’t explain it to a six year old, you don’t understand it yourself.  Albert Einstein

Real knowledge is to know the extent of one’s ignorance. Confucius

Nobody knows enough, but many know too much. Marie Von Ebner-Eschenbach:

I like people who show their vulnerability. Sounds like the highly regarded minds thought the same thing.

Then, I did some research to see how information (and the universe) is growing in the 21st century.

According to www.space.com, “Space itself is pulling apart at the seams, expanding at a rate of 74.3 plus or minus 2.1 kilometers (46.2 plus or minus 1.3 miles) per second per megaparsec (a megaparsec is roughly 3 million light-years).”

If you can keep up with all of that, good luck.

My advice for dealing with others in the 21st century is simple.

By doing this, you will end up learning much more, and resonating with people in a deeper way.

And by the way, there is no way you know-it-all!