Guess what happened? While we were all sleeping Big Brother happened! Have you read the book 1984 by George Orwell? Who would have thought that it actually came into being? And we bought it? No, it was not imposed, we chose it, and pay for it month after month. Did you know the city of London tapes everything? There are cameras throughout the entire city.  No matter where you go a camera has its lenses focused on ….You!

We are in the 5th age as humans. Some people think that we are still in the age of information but according to Watts that has already come and gone.

First, there was the hunter gatherer age. We traveled great distances on foot looking for our food, water, and survival. Then we had the agricultural age. We learned how to plant our food. This lead us into the industrial age where we attempted to maximize our output and products in a way that would keep costs down. Then we did a quantum leap into the information age. Technology boomed during this era, and humans needed to simply understand how this impacted them, but as the technology developed one thing became certain: uncertainty. Which lead us into this new, current age of uncertainty. In this age there is no box. The only thing that is constant is change.

Also, there are 7 generations on the planet at the same time. This has not happened in the history of the world. Is this a good thing? Stay tuned for part 2. 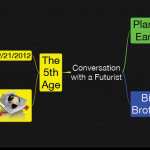 5 thoughts on “Conversation with a Futurist? It hurts your brain, and so will this post”