This is the fifth in a series about educators making a difference. 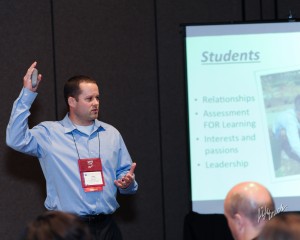 Chris Wejr (pronounced Weej-er) is currently the principal of Kent Elementary School in Agazzi, BC. Because Chris’s last name is pronounced similarly to the famous Ouija (pronounced wee gee) and he loves talking about the future of education, he decided to name his blog The Wejr Board. The question is… where will this blog post take you? Keep your fingers placed gently on the mouse and find out.

Chris began his social media journey in 2009 as a result of helping a local dance studio who was embarking on a social media journey of their own. He was on facebook since it started, and even signed up his school in order to connect with parents. Yet, it took about a year for him to finally make that first post on his own blog.

He credits George Couros and Patrick Larkin (founders of #cpchat) for helping him see the power of twitter, blogging, and social media in general. Chris feels that twitter has been one of the most important aspects in connecting educators throughout the world. “Because twitter is limited to 140 characters, it is difficult to build relationships and connections,” noted Chris, “But it allows us to begin our connections which lead to reading blog posts, direct messaging, and skypeing.” 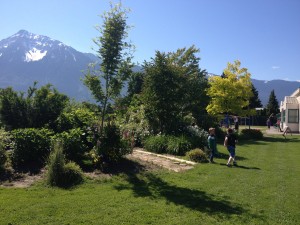 What a view! Kent Elementary Garden

Chris has received so many ideas from twitter that he has been able to share with his teachers, parents, and even students. His goal is always clear, how can this make my school better? If there is an area that he needs to know more about or research, he turns to twitter, and rarely is disappointed by what he finds.

Even though Chris was reluctant at first to blog, he now engages in the practice regularly. He feels the most important part of blogging is making it personal. For instance, his facebook account was recently hacked, and the person began sending out inappropriate messages on his behalf. After he dealt with the situation, he made sure to blog about it so that others can learn (Power of A Positive Digital Footprint – A Personal Story). When he writes his blogs, he likes to use material that allows him to spread ideas, which hopefully leads to bigger ideas for others. As for his process, he usually writes, edits, waits, read again, and then posts.

When I asked Chris about his series of posts on awards ceremonies, his passion for the subject was evident. He wants to be able to recognize all students, but not in the way Robert Dinero’s character did in Meet the Parents (I didn’t know that they made trophies for 8th place). Chris has learned a great deal about award ceremonies from the First Nation People Sto:Lo. “The Sto:Lo people have awards embedded in their culture, and the focus is to acknowledge everyone because everyone matters.” So when Kent Elementary has awards ceremonies, they honor the learning, the intrinsic motivations of each learner. This is not to say that everyone gets an award, but the teachers are encouraged to discuss the students in terms of their passion, and future goals. According to Chris, it has to be authentic. 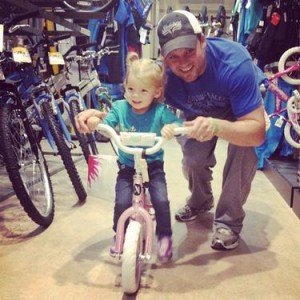 Towards the end of our conversation, I asked Chris to dust off his Wejr-board and tell me about the future of education. He sees technology as what we do, and in the future he sees educators making the learning more relevant, and personal. He sees educators transitioning from judges to coaches that focus on the process, not just the product. He sees an educational community that creates the conditions for everyone to be successful. He said, “We all know that kids are never standard, so why do we always try to make learning, and assessments standard?”

I brought up the issue of time with Chris, and he said, “I agree with George Couros when he told you it is about priority. I tweet at about 3 times a day (morning, lunch and evening). I have 18 month twins, a wife, and other interests as well. I just balance my priorities. I am able to get it all done.”

Chris Wejr is a learning leader, and based on our conversation he continues to work on building the capacity for his students, teachers, and parents to learn as well. He is always open for dialogue, and I am sure would be willing to break out the Wejr-board to help you with a problem or a question.