This is the tenth in the series about educators making a difference. 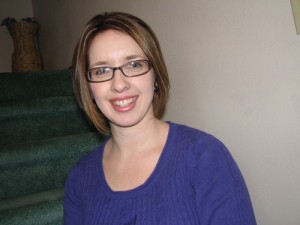 When I first turned to social media to create my PLN, it was Jessica Johnson who was my guide. Without even knowing it, I spent the first month on twitter learning from her, and Curt Rees. I studied their blogs, read their tweets, and anything else I could get my mouse on. I can remember sitting in my office at work, talking with a teacher who was helping me understand all of this technology stuff, and he said, “I checked out PrincipalJ’s website, and if you want to do what she is doing, it is going to take a lot of time and commitment.” He was so correct.Jessica began her journey in social media in 2007. She tuned into the Principal Podcast that was being broadcast by Melinda Miller, and Scott Elias. She was following them, similar to how I was following her in 2012. She listened to the podcasts, read their blogs, and got her hands on anything they recommended. She wanted to learn. They kept talking about twitter, and how powerful the medium was in education. It took her about a year, and finally in 2008, Jessica Johnson became @PrincipalJ.

As a brand new principal, Jessica was determined to be the best that she could be. Here she was in rural Wisconsin, with the new ability to completely open her world up to all that twitter, and social media had to offer. Yet, at first, she told no one, not even her teachers. When I asked her about this, she said, “It was my thing. I didn’t seek to have a lot of followers, or make a huge impact. I just wanted to learn, and connect.” Slowly but surely, Jessica found that she had to pay it forward. She finally decided to take off the “private” setting on twitter so she could at least re-tweet these wonderful ideas she was gathering. She ripped the Band-Aid off. 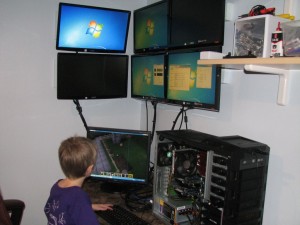 Since she began to pay it forward, Jessica has grown her blog and twitter network, and has become one of the most respected administrators in social media. When I asked Jessica about her blogging process she said, “I would have to say I am more like George Couros. I like to write it down, post, and walk away. I think getting the right images sometimes takes me longer than the actual post.” She went on to say that she mainly blogs as a reflective tool for herself, and her teachers. Blogging forces her to be reflective.

Currently, Jessica is working on a book project with @shiraleibowitz and @KathyPerret as a result of her participation in the #educoach on twitter. Together they moderate the #educoach chat which happens on selected Wednesdays at 9:00 PM CST. Jessica, along with @shiraleibowitz and @KathyPerret said that the book is being collectively written from the coaching perspective of a principal. She feels connected with the coaching realm because that is the type of leader she is at her school. Jessica feels that her role is to make her teachers better by encouraging, and motivating them to get to the next level. 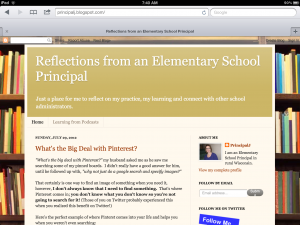 Reflections from an Elementary School Principal

Jessica’s passion, as exemplified in her tweets, blogs, and facebook likes, is reading. Her background on her blog is, you guessed it, books. In viewing her last 10 posts on her blog, she referenced her reading/student reading, or the importance of reading 80% of the time. Her most discussed concept of late is the Daily 5. She had completely integrated the Daily 5 into her school, but as you would guessed it, she did not mandate it at first, she allowed the teachers, and students to see the importance in their own way. As they moved forward, and she saw the positive impact, the Daily 5 is now the new normal.  She says that the Daily 5 has encouraged more reading at her school by teachers, parents, and students.

Jessica Johnson has been very influential in mentoring me (and countless others) in navigating the power of the PLN. She is always available to assist with technology, twitter, pintrest, and providing feedback on blogs.

The summer is winding down, and I will soon be on vacation. Look for the final posts in the series on other educators making a difference through my conversations with Curt Rees, Shelly Terrell, Lisa Dabbs, and Cool Cat Teacher.

2 thoughts on “Skypeing with my social media mentor @PrincipalJ”