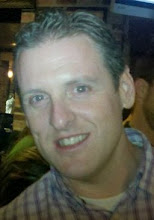 The Administrator formerly known as BHS_Principal

About  4 years ago the inner writer within Patrick Larkin found a way to streamline communication with the school community. He started a blog that would eventually retire the tried and true “School Newsletter.” Not soon after, while at a Blue Ribbon Conference, Patrick heard Will Richardson discuss social media. This was the first time he heard about #edchat and the power of twitter. Something clicked with Patrick, but not immediately. Patrick took time to “lurk and learn.”

Sometime after he met Will Richardson, Patrick was contacted by George Couros, who at the time was one of the few principals on twitter. George discussed his idea about connecting principals through social media. Patrick was very interested. He had grown tired of the “email list serves” that had run their course. This new social media, thought Patrick, would allow everyone a faster, more streamlined way of communicating throughout the world.

Patrick’s superintendent (Eric Conti or @ericconti)  was supportive of his new interest in social media. He was able to see how Patrick would be assisting his teachers, and students as he learned new information from the other educators. Patrick continued to improve his blog, signed his school up for a facebook page, and shared the great news with anyone who would listen. Teachers and parents began to sign up for twitter, and follow the school on facebook. Then something happened that would change Burlington High School forever. It happened in Iowa of all places. 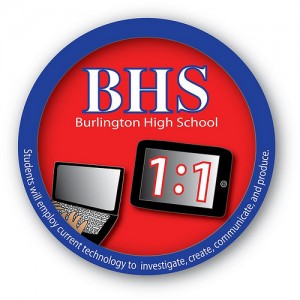 Patrick learned about a conference in Iowa (Iowa 1:1 Institute) focusing on 1 to 1 computing, something that was not common in Massachusetts. Patrick’s superintendent and school board approved a trip to attend the conference with a group of schools in Iowa.  This is where Patrick first met Scott McLeod (co-creator of the wildly popular video series, Did You Know? (Shift Happens) as well as Shannon Miller, Darren Durflinger, and John Carver from Van Meter, Iowa. It was during this conference that Patrick was able to see the impact of all students having their own web-enabled device (1 to 1).

Once he returned to Burlington, Patrick began to work with his colleagues to build the foundation needed for a 1 to 1 initiative at BHS. All told, it was a year and a half of meetings, research, consensus building that eventually paved the way to have the 1 to 1 begin in September of 2010. No stone was left unturned – they looked at the network, educational benefits, devices, and professional development. The team ended up choosing iPads as the device for the 1 to 1. They were one of the first schools in the nation to embark on such an aggressive 21st century journey! 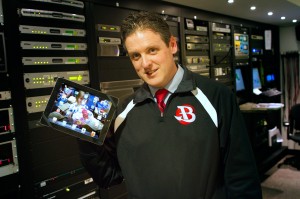 While Patrick was working on the 1 to 1 initiative, he quickly became one of the most recognized names in the twitterverse. Everyday Patrick learned a little more, posted a little more, and connected with scores of educators throughout the world. He and George started the #cpchat, and the connected principals’ blog to allow administrators and teachers the platform to discuss various topics. Patrick attended, and presented at local, state, and national conferences on the importance of being connected.

I asked Patrick about his famous office in Burlington High School. For those of you who don’t know, Patrick gave up his office a few years ago. His high school became his office! To Patrick it all made sense, he told me, “I had everything I needed. People could call me on my cell phone (he makes it public), we had wifi so I could use my Ipad or laptop wherever, and I found no need for file cabinets.” So, armed with his mac book, Patrick spent his past few years in the main lobby, hallway, and most importantly classrooms. If he had a confidential conversation that needed to take place, he was always able to find a space. Patrick modeled his connectivity, and was available for all to see.

Earlier this summer, Patrick made a decision to apply for a vacated Assistant Superintendent position in his school district. Fortunately for his district, Patrick was selected. His former associate principal ended up succeeding him as the new BHS principal, and Patrick decided to “give it all away – he gave his successor the BHS_Principal name for twitter, the blog, the office.  Everything.

Now we will be able to follow Patrick M. Larkin as he embarks on his new journey as Assistant Superintendent. Check out his first post.

Look for upcoming posts on other educators making a difference such as Curt Rees, Jessica Johnson, Shelly Terrell, Kelly Tenkley, Cool Cat Teacher and many more….

One thought on “My Skype with Patrick M. Larkin, the Administrator formerly known as BHS_Principal”